Some people may already know that I have a not-so-secret life as a book artist, as well as a painter. One body of my work as a painter is large portraits of individual burned trees. (See the Burnscape section of my website.) Spending recreational time in the wilderness all over the American West has brought me in close contact with large burned-over areas. I also began to notice the number of dead trees in forests that otherwise seemed fine. I saw what seemed like writing or hieroglyphics on the inner bark of dying trees.

It turns out there are thousands of species of bark beetles, most of which are happily decomposing already-dead wood. But a few species that attack living trees en masse have become epidemic thanks to climate change: warmer winters don’t kill off the larvae and warmer, longer summers allow them more reproduction cycles. And drought- or heat-stressed trees are more vulnerable. Working with two entomologists and a forester, I’ve created a series of artist books on the topic.

For example, Volume XIV, Ars datum est above, is made from an actual Eastern Washington log, with laser-cut pages bound into its center. Each page is essentially a bar from a bar chart representing areas of British Columbia and Alberta affected by mountain pine beetle from 1999-2007 – so the book is art and data, too.

My most recent  bark beetle book was definitely the most technically ambitious one I’ve tried yet, and I learned quite a bit in the process.

I collected a branch with many beetle galleries on it, interesting to me because, with rot, the larval galleries were dark-on-light instead of the more typical light-on-dark. It suggests intra-tree spread: the number of engraved galleries* on the pages increases from bottom to top as you page through the book.

The branch was somewhat curved and also twisted along the axis of its split. I thought the best way to create pages for such a irregular, non-rectangular shape might be to obtain a 3D model of each half, create the solid between them and then slice it in software. Unable to find a local service bureau for 3D scanning, a mechanical engineering friend created a seat-of-the-pants XYZ data capture system composed of 2 rulers, a radial arm saw and digital calipers. 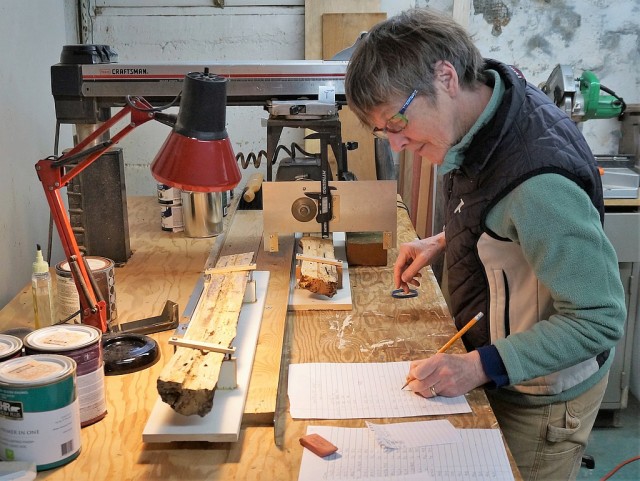 It took me an entire day to take (4) XYZ measurements at 1-centimeter intervals along one half of the branch. And I now realize this is just too coarse, I missed some key features in the shape.

After a lot of work trying to understand how to import an XYZ data cloud Fusion360, we eventually succeeded in making the data points operable, creating the solid volume between to the 2 branch half models, adding binding holes and slicing it. I also traced the actual ragged fore-edge, imported that line and created a second solid to chomp into fore-edge of the book page solid, so that it would have some of the nicks and craters of the beetle galleries where they cross the edges from front edge to back edge. Slicer, a Fusion360 app, at least made the slicing easy and generated flat cutting patterns. Then I traced some of the beetle galleries onto the cutting patterns for engraving.

Binding the book was equally challenging because:

So it’s “differentially” bound; that is, sewn where spine-side page edges met best.  Some of the tiny and/or non-spine side slices were glued to the branch wood before binding. I used pieces of tea-dyed felt as end-papers to soften the stair-stepped edges of the glued-in pieces and to hide the ends of the binding threads.

Many, many thanks to Jon Cluts and Rafael Machado de Lima Silva at UW Bothell’s Maker Space; Tom Stone, who made the data capture system and helped me work out how to get the data usable in Fusion360; also to Per Steenstrup and his brother on the latter task; to the support folks at ponoko who helped troubleshoot my cutting/engraving files. And Steve, who likes to be away from home so he can’t hear the cursing when I can’t get something to work : – )

*Galleries is the term most often used to describe the complex patterns that the larvae chew between the bark and the sap wood. I’ve also seen them called larval mines.

This site uses Akismet to reduce spam. Learn how your comment data is processed.